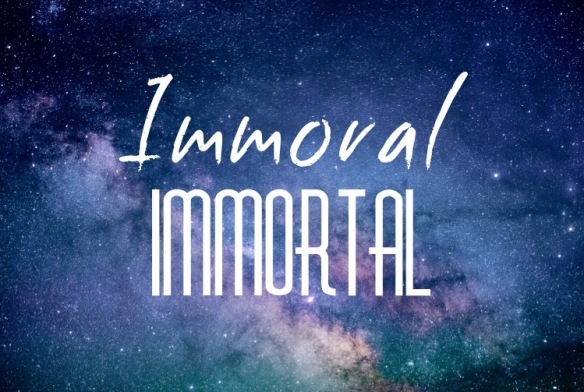 It didn’t take long for the mysterious woman to make the local newsbytes.

Newsbytes streamed twenty-four hours a day, every day. Every little thing that happened in your section made it on the news. But a strange woman dressed like a Ward in weird clothing grabbed the headlines. Pushing aside the otherwise breaking news that someone had broken into a boarded-up library and stolen several books, Jessica Rabbit was all over the newsbytes.

The newsflash gleamed across Ric and Professor Irving’s lenses and they accepted the update. ‘WOMAN IN RED – READ NOW?’ They both blinked twice and the story was available.

‘EYEWITNESSES SAY THE GHOST OF AN OLD-EARTH SERIAL KILLER IS ROAMING THE STREETS.’ ‘WIFE OF JOURNALIST SAYS ‘MY HUSBAND WENT TO MEET HER AND NEVER CAME HOME.’ ‘MORE DISAPPEARANCES HAPPENING DAILY.’  ‘WOMAN IN RED KIDNAPPING MEN IN THE NIGHT.’ ‘HEAD-WARD, MISTRESS LUNA, CLAIMS THE SUSPECT IS NOT A ROGUE WARD.’ ‘MORE TO FOLLOW.’

They both blinked twice once more and the story slid away from their vision and the professor’s apartment came back into view.

‘As always Ric, you stated the obvious.’

‘Alright, old man.’ Ric jeered, a smirk on his face. Despite the professor’s aged features, he was only twelve years older than him. Irving always said that decrepitness was the price to pay for knowledge.

‘You’re going to meet her, is that your grand idea?’

‘And to whom should I invoice your funeral costs?’

‘You.’ Ric laughed but the professor didn’t seem to be joking. ‘I’ll be fine, Irving. As long as you’ve got my back.’ He glanced up at an old-fashioned clock on Irving’s mantlepiece. ‘I’ve got to go to work – they’re going to sack me if I’m late again.’

‘You are too smart to be working in that factory.’

‘Not according to my aptitude tests.’ Ric walked over to the elevator and pressed the call button. It dinged a pleasant ding and he waited for it to arrive.

‘I wouldn’t trust those if I were you. You aren’t from this area originally – they probably allocated labour work because there was a space, not because you’re unintelligent. You would be much more at home in the education sector.’ Irving had a stern, fatherly look on his face which made Ric feel like a teenager again. Which both hurt and healed him.

‘Teaching a bunch of screen-grabbing kids? No thanks, professor. I’ll be back soon, don’t you worry, old man.’ The lift doors opened and he stepped inside, his back to the professor.

It was only as he turned back to faced Irving that he heard the first shot pierce through the living room window and his Irving in the left shoulder.